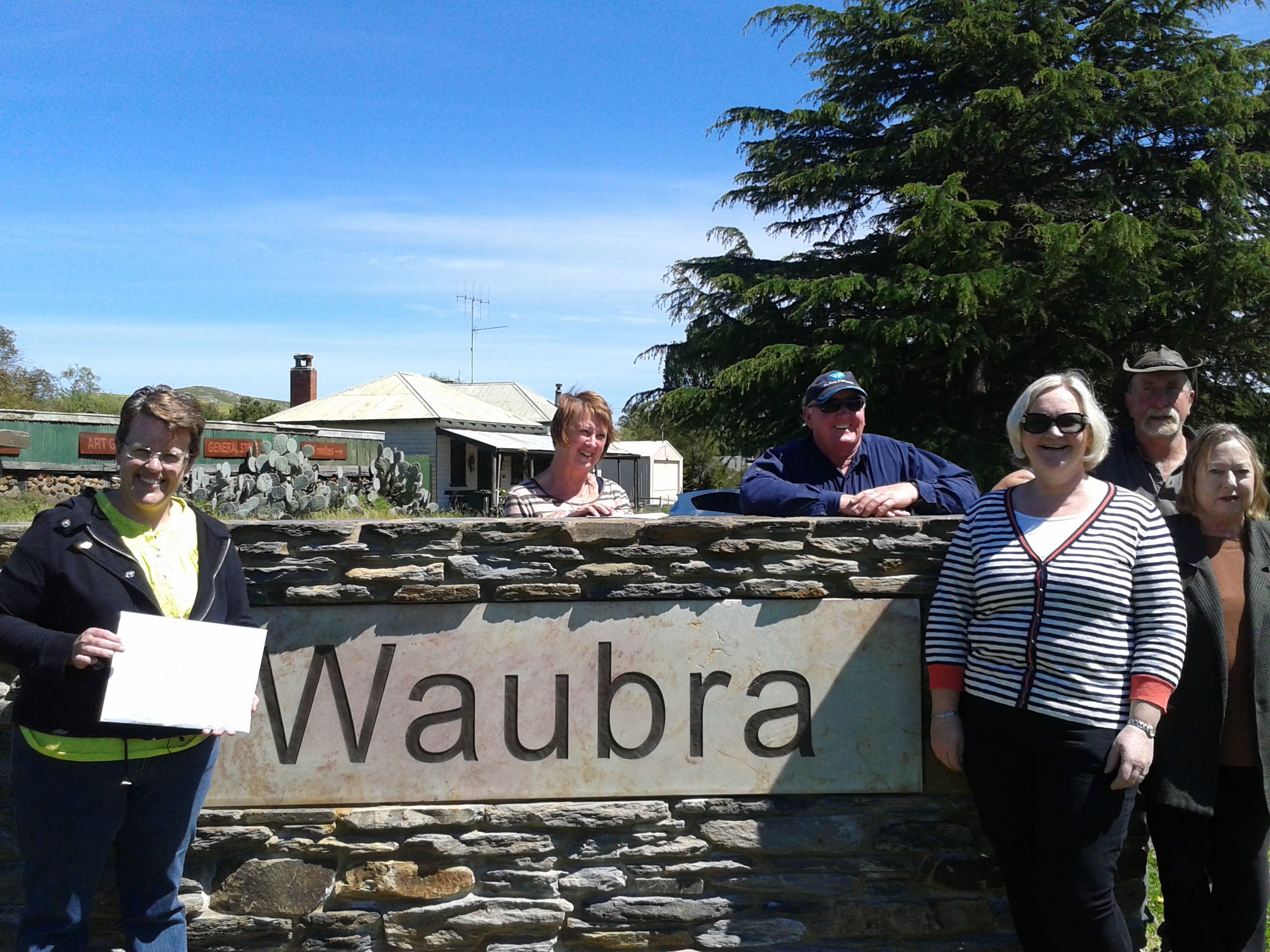 The community of the small farming town of Waubra in Western Victoria took an important step forward today and sent off a petition with 316 signatures to the anti-wind campaigning organisation, the Waubra Foundation, asking them to leave the town's name alone.

"We are very pleased to have a wind farm in our town and claims that the Waubra Foundation make about ill health don’t ring true for the vast majority of our community,” said Karen Molloy, wind turbine host and spokesperson for the group of 10 residents who collected the petition.

"For us the wind farm has meant valuable income onto our farms and into our community. For at least one of our farmers it’s been the difference between staying on the land and going under.

"The wind farm has brought new energy and support to our sporting clubs and community organisations, even the school and kinder.

"Waubra is a proud farming community, not a disease.

"We are calling on the directors of this organisation to respect the good name of our town and remove it from their organisation’s title.

Waubra has hosted a wind farm since 2009. Originally titled the Waubra Disease Foundation, the Waubra Foundation was established in 2010 by businessman, Peter Mitchell and CEO, Sarah Laurie to campaign against wind farms and what it claims are health problems associated with them. Incredibly, none of the directors live in Waubra, with most coming from Melbourne, Sydney and South Australia. The closest director lives over 100km away in Portarlington.

The petition contained 316 signatures in total, with signatures from 179 people who live in Waubra and another 137 signatures from people associated with the town, either through work, membership of the various sporting teams or because they grew up there.

"This tarnishing of the town's good name affects all the people who are part of the Waubra community,” said Margaret McDonald, a neighbour of the wind farm who doesn’t host turbines on her property.

"We acknowledge that a small number of our neighbours are affected by health problems that they attribute to the wind farm. We empathise with them and we respect their right to speak out about it.

"The foundation is completely within its rights to campaign against wind farms if they choose, but just leave Waubra out of it.

"Sarah Laurie travels regularly around the country and everywhere she goes she drags down the name of our town and connects us to ill health and sickness.

"This does not reflect what it is like to live in Waubra and it is not the way we want to be seen by the rest of the country,” concluded Ms McDonald.

We, the community of Waubra, are deeply concerned that your organisation has for many years tried to link our town in the public’s mind with wind farm-induced sickness.

Waubra is a farming community, not an illness.

We are comfortable with the wind farm. It supplies much-needed income to our farms and our community. It does not make us sick.

Your organisation has never spoken for Waubra. Out of respect for our town’s good name, we ask that you immediately remove any mention of Waubra from the name of your organisation.

Covering Letter sent with the petition

We, the undersigned, live in Waubra. Some of us host wind turbines on our properties while others of us are close neighbours. The primary concern of all of us is the reputation of the town that is our home.

Waubra has a proud and long history. Our land is based on rich volcanic soils that support a diverse agricultural production base and features views of cleared agricultural land, magnificent geological features and a wind farm. We actively support one another through a range of clubs and community groups.

Since the placement of the infamous “wind turbine syndrome” ad in our local newspaper in 2009, the organisation you originally titled the “Waubra Disease Foundation” has tried to link our town in the public’s mind with sickness, a connection we find false and demeaning to our town. Waubra is a farming community, not an illness.

We are writing to ask you to give us back the name of our little town.

Please find attached a petition of 316 signatures we have collected calling for you to immediately remove any mention of Waubra from the name of your organisation. 179 of the signatures come from people who live in Waubra and it’s immediate vicinity while a further 137 come from people closely associated with the town – either through work, recreation or having grown up here.

Your tarnishing of Waubra’s name affects all those people who are associated with the town.

As we understand it, not one of you lives within even 100km of Waubra. Most of you live much, much further away. You have not come and spoken with us. If you had, you would have realised that we are proud of our town and comfortable with the presence of the wind farm in our paddocks. It has brought dependable income to our farms, strengthened our broader local economy and has brought welcome new jobs to our town. It does not make us sick.

We acknowledge that a small number of our neighbours are vocal in their concerns about the wind farm. They are true members of our community and we thoroughly respect their right to speak freely. In no way do we wish to stop them, or you, from speaking their mind. However, we fail to see how the Waubra Foundation's unrelenting and unscientific misinformation campaign against wind energy helps these individuals with the problems they are experiencing.

Your organisation has never spoken for Waubra. Out of respect for our town’s good name, we ask that you immediately remove any mention of Waubra in the name of your organisation.