When the current Senate Inquiry into Wind Turbines was launched it showed every sign of being an attack on wind farms and a launching pad for increased regulation of an already heavily regulated industry.

The venerable yet medieval philosophers of the Flat Earth Institute joked that perhaps the Inquiry was better thought of as an Inquisition.

“We proudly endorseth Senator John Madigan’s inquisition into wind energy. It buildeth on our legacy of denying enlightenment and excelling at witch-hunts,” said Professor Greenhausen of the Flat Earth Institute. 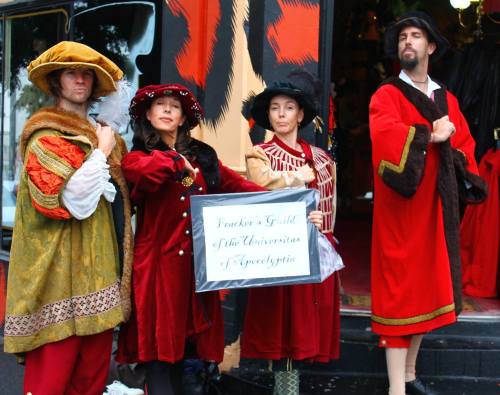 But truth, as we know, is often stranger than fiction. We've had the first public hearing and now it appears that it actually is an "Inquisition". At least according to the Australian.

And the chair of the Inquiry, Senator John Madigan, happily retweeted the description. 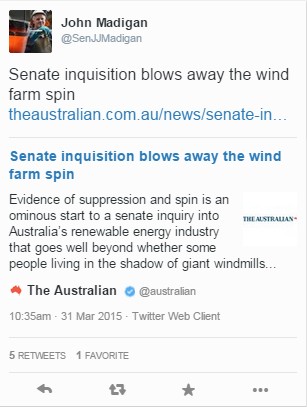 But in all seriousness...

On the morning of Wednesday 18 March, when the Inquiry had received and posted a grand total of 35 submissions on their website, we put out a call to our supporters to make their voice heard. By Friday afternoon, the Inquiry had received over 200 submissions through our portal from wind supporters around the country, making it impossible for them to ignore the full range of opinions on the issues. There are now 270 submissions made through our site. Deadline for submissions was again extended to May 4 so it's not too late to submit if you haven't already.

We're looking forward to the Inquiry acknowledging in their report views like these ones expressed by a range of our members:

I was employed in the renewable industry for over 7 years working as a wind farm developer and environmental planner. My position was made redundant in 2013 due to a lack of government support in renewable energy making investment in the industry unsustainable. Myself and hundreds of others have lost their jobs in this industry because Australia is lagging behind the rest of the world in terms of renewable energy support and investment.

I am the Principal of a General Practice situated in close proximity to a number of large wind farms which have been located in our district since 2009. Many of my patients live even closer to the turbines.

We  have had no patients become ill with any of the symptoms attributed to wind turbine sickness.

I have worked on a wind farm in South Australia for over 11 years and have had nothing but positive experiences. I work along with 19 other people who are all local to the area. Each has a family and own or are buying their homes so the industry has been a significant support to the local community. We run 9 service vehicles, all of which are serviced and maintained in local mechanic shops, purchase all our fuel, office equipment and stationary from local businesses, use local trades and contractors for cranes and workshop services, use accommodation services for visitors. All of these have a massive flow on to local industries and businesses in the are.

I or anyone else who works here have not had any health issues despite being within 200M of 2 turbines on a daily basis in our office. We are also surrounded by a total of 135 turbines running all day with no issues.

Building wind towers was a really good thing for Portland’s economy. Now we don’t have that work, so there’s less work going into the town. That’s such a pity. I hope you can remember this when you’re spending all this time doing another inquiry.

Ex-blacksmith Senator comes face to face with metalworkers and farmers 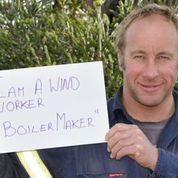 If there's one thing that's stood in the way of the development of a sustainable wind tower manufacturing business in Australia it's constant reviews and inquiries like this one.

The Inquiry's Chair, Senator John Madigan is an ex-blacksmith who, with Senator Nick Xenophon and Qld MP Bob Katter, started up the Australian Manufacturing and Farming Program to promote manufacturing in Australia.

So it would have been powerful for Senator Madigan to hear from representatives from Portland wind tower manufacturer, Keppel Prince.

Employee Gilbert Wilson, also a councillor with Glenelg Shire Council, had this to say - “What I’m disillusioned with is yet another Senate inquiry into wind farms which is stifling confidence in the renewable energy sector at a time when there needs to be investment.”

Keppel Prince assistant general manager Daniel McKinna said he was pleased the Senate inquiry listened to the views of the Portland delegation.

“We’re at the other end of the infra-sound debate in that we’re the manufacturers but I think everyone in the sector wants that area to be looked at,” he said.

“That doesn’t mean we should stifle the wind farm sector.

“The lack of certainty over the renewable energy target is a big concern for us, so it was good to speak to some of the crossbenchers and government senators about the link between the target and regional development, particularly in the Portland region.”