What choices has NSW got on wind energy at this election?

Time for parties to step up on wind energy

The electorate of Goulburn has as much to gain from future wind farm development as any electorate in the state. 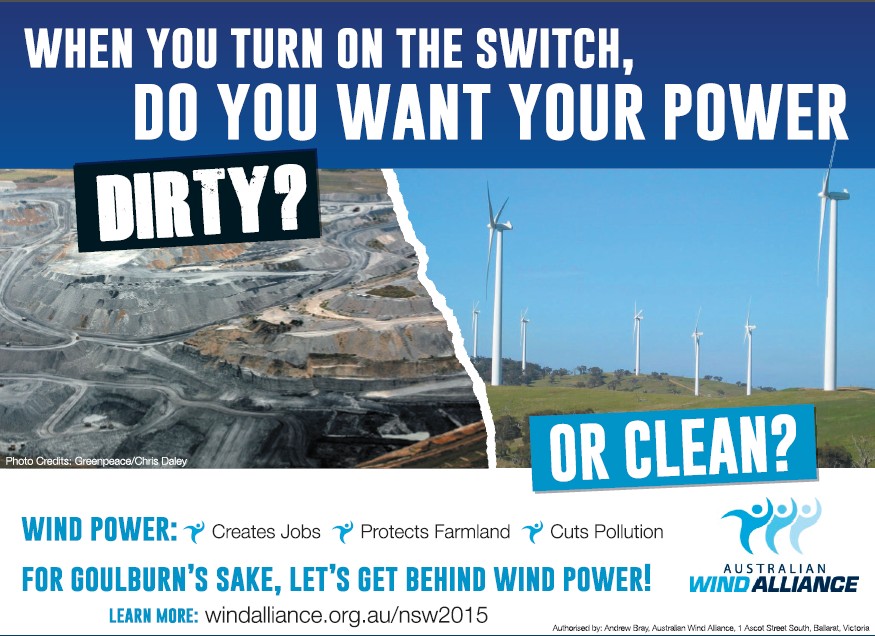 Call your Goulburn candidates and find out what they think about wind power.

Time for parties to step up on wind energy

If there is an economic opportunity to be won for Goulburn it is wind energy.  Farmers know this.  Business knows this.  Independent polls show that the majority of regional voters want this.

According to the NSW Office of Environment and Heritage there is a whopping $21 billion worth of wind farm investment in regional NSW at stake. Goulburn stands to win or lose on the basis of government policy on renewable energy, including wind farms.

But three weeks out from the NSW election most candidates appear to be focusing their attention elsewhere.  Thanks to questions put by the Goulburn Post we know that Labor’s Ursula Stephens supports renewable energy investment in Goulburn but we have yet to see a plan for growing these opportunities.  The Greens make it a cornerstone of their economic plan for regional renewal.

Regrettably, local member and Planning Minister Pru Goward remains silent  about how she, if re-elected, intends to lead NSW out of the planning chaos that is stalling wind farm developments.

Her government has had three years to make a difference to the quality of social and economic outcomes for electorates with significant wind resources like Goulburn. Instead they have presided over a planning paralysis with draft guidelines that deprive regional communities and industry alike of clarity in regard to new developments.

After nearly a year as Planning Minister, Ms Goward be able to inform her electorate about the government's intention with respect to wind farm planning reform.

Ms Goward has of course made her personal feelings clear about wind farms. When the ACT government looked like it would contract new wind projects in the Australian Capital Region, Ms Goward joined federal member Angus Taylor in a press conference to call wind farms “hideous” and warn the ACT government not to build wind farms in her electorate. One can only wonder how Goulburn businesses felt to hear their local member telling potential investors not to come and invest in their electorate!

Ms Goward has received considerable input on solutions from members of her own electorate concerned about the toxic nature of wind farm politics and its negative impact on clean energy investment, agriculture and emission reduction.

For the past four  months representatives of the Australian Wind Alliance have initiated formal meetings with the Minister, culminating in a joint meeting in Sydney with the Environment Minister Mr Rob Stokes in February this year.  At each of these meetings AWA provided the Minister with evidence based solutions to a planning system all parties agree is “broken”. These solutions have been put forward to both major parties.

The key to reforming NSW’s planning system for wind farms is to remove the red tape and confusion introduced in the draft guidelines. This type of over-regulation failed spectacularly in Victoria where the previous government was only able to approve two mini-projects with a grand total of nine turbines over the course of its four year term. The worst parts of this system are already being repealed by the incoming Andrews government.

NSW also needs policy settings that facilitate greater community acceptance of wind farm projects. We believe this should include:

If the candidates in this election are serious about the future of the Goulburn region, if they genuinely care about community cohesion, regional economic development, resource protection and energy security then better planning for renewable energy must  be part of the policy agenda. As voters we should require each candidate to signal how they intend to lead on these issues.

The government has a Renewable Energy Action Plan but has left planning law to drift whereas The Greens have provided a detailed policy to drive wind energy development.

While the primary roadblock to new wind farms in NSW remains the Abbott government’s intransigence over the Renewable Energy Target, there is plenty the state government can do to get the show back on the road.