Check out Australian Wind Alliance National Co-ordinator, Andrew Bray’s Video of his recent trip to the Wimmera Plain and his published Opinion Piece.

In Victoria’s dryland farming region south of the Mallee scrub and east of the South Australian border lies the flat expanse of the Wimmera Plains. Horsham is the major town in a region largely dependent on the wheat and sheep industries with expansive plains dotted with flour mills and grain storage silos.

It can be tough to making a living on country like this. The climate is semi-arid, a lot of the soil is infertile and sandy and temperatures are hot and can climb up to 46°C. The fluctuating values of the agricultural commodities that dominate the region's economy means smaller towns have to work hard to stay viable. 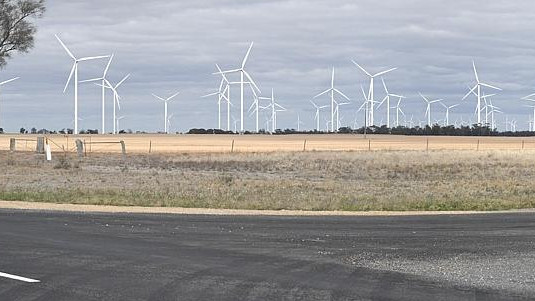 One commodity the Wimmera Plains has in abundance is wind. In fact, this ancient landscape of undulating clay plains and sand dunes was largely shaped by wind and now it’s wind that may provide an economic lifeline to this district. This week, the Victorian State Government gave the greenlight to the 116 turbine Murra Warra Wind Farm on the dusty Wimmera Plains. The project is huge, both in stature and economic impact. It will power 250,000 homes and create 60 ongoing jobs once switched on. It is expected that construction of the $650m project will take approximately two years to complete and directly employ more than 600 people.The community of Murra Warra and surrounds have been proactive in grasping the opportunities on offer. Eighteen local farming families got together to negotiate with the developer on how the wind farm will work for them. They’ll now receive a steady income from hosting the turbines. At the same time the developer will pay nearly $3 million into a community fund over the next 25 years. The local will be the ones who decide how this money is invested with an eye to strengthening local services and keeping families on the land. So it’s perhaps unsurprising that not a single objection was made against the project during its planning stage.Projects such as the Murra Warra Wind Farm are rapidly making Victoria a leader in renewable energy with the State recently embracing a range of ambitious policy initiatives, including a State-based Renewable Energy Target that will drive clean energy investment and new jobs.As old and outdated coal-burning power stations like Hazelwood reach their use by date, wind energy is powering more of our homes and giving a much-needed boost to regional economies along the way. If the Federal Government was listening to voters it would do everything in its power to develop strong, national renewable energy policies, instead undermining our transition to a grid powered by clean energy.  The reality is the Murra Warra Wind Farm on the Wimmera Plains would remain a pipe dream without Victoria’s push to modernise its electricity system.