Members give Minister the heads up on support for wind 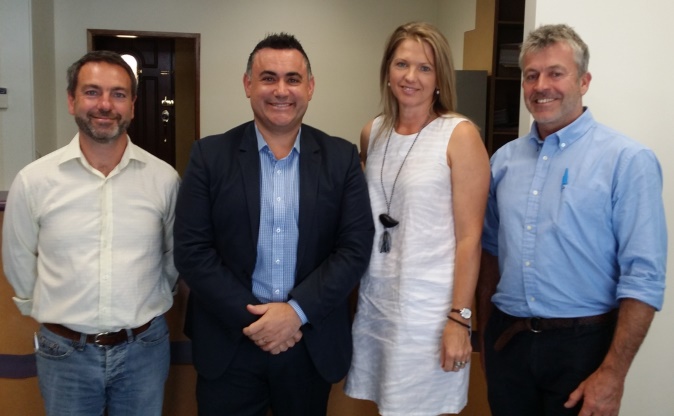 AWA members and farmers, Linda and Paul Cavanagh and I travelled to Queanbeyan on Monday to meet with NSW Minister and local member for Monaro, John Barilaro. As Mr Barilaro is the Minister for Regional Development and wind farms represent such a good regional development opportunity, we thought it was important he heard from people on the ground about what’s really going on in communities with wind farm projects in the offing.

Linda and Paul are potential host landholders in the Rye Park Wind Farm project and are part of a local group of wind supporters with other hosts, neighbours and local business people.

While a small number of people raising objections to the project are often the ones making the news, there is plenty of quiet support for the project amongst the wider community. Rye Park is not a big place and there aren’t many economic opportunities that come its way. A new wind farm that delivers over $2 million per annum to the local community through payments to landholders, permanent staff and community fund contributions would, without exaggeration, be the single biggest economic shot in the arm the town has ever had.

Linda and Paul made some strong arguments that Rye Park continues to have a future supporting agriculture, not just being divided into small lifestyle blocks, and that wind turbines fit just fine with farming. They also pointed out that recent property sales showed that the prospect of a wind farm in the area wasn’t harming values in the area.

Mr Barilaro listened with interest and took the observations about the local dynamics on board. He also noted that the Baird government has a Renewable Energy Action Plan designed to build wind and solar projects across the state.

The Minister was keen to stress the importance of early and effective community engagement for new wind farm projects and that where this isn’t done properly, community divisions follow. He was scathing about the poor engagement around the Jupiter Wind Farm project which was recently rejected by the state’s Planning Department. This was something we totally concurred with and were pleased to see the department keep the bar high for new wind projects. It’s completely reasonable that local communities know they will be properly consulted and informed at all stages of a development project.

The main priority for the Baird government now is to finalise the wind farm planning framework, which has languished in draft form since 2011. We would be keen to see an approach similar to that of South Australia where wind farms are treated the same as any other state-significant development with wind farm-specific issues such as visual amenity, noise, etc. dealt with through specific Director General Requirements, or DGRs.

Paul and Linda were encouraged by the discussion and are hoping for a change from the negativity of some government Ministers towards wind power in the past.