The shambolic government display this week makes it look as if the ‘climate wars’ that have gridlocked Australian politics and hobbled climate action for at least a decade haven’t gone away. And again, wind and renewable energy policy is under a cloud.

After floating the idea of an ‘industry specific emissions intensity scheme’ as part of a review of the Government’s climate policies on Monday, Energy and Environment Minister, Josh Frydenberg was quickly forced to back down on the idea before the sun rose on Wednesday after a range of government ministers and backbenchers hit the media to let Frydenberg and PM Malcolm Turnbull know who calls the shots. Conservative MP, Cory Bernardi, a noted climate denier, publicly labelled the idea as “one of the dumbest things I’ve heard”.

As Climate Institute CEO, John Connor correctly described it, the government was bending to the demands of “reactionary ideologues”. A potentially worthwhile solution to the challenge of cutting emissions, which had the support of a range of business, peak bodies and researchers was consigned to the never never.

Clearly the government is locked in an internal bunfight about how, and indeed whether, it will deliver on its commitment to the Paris accord, which compels Australian to reduce emissions to 26-28% by 2030. This fails the super-majority of Australians who support renewable energy and just want their government to get on with the job.One of the pieces of collateral damage from the government’s policy train wreck could be Australia’s 2020 Renewable Energy Target (RET). To achieve the 33,000 GWh of clean energy by 2020, 3000 megawatts of new renewable projects, or approximately 20 large wind farms, needed to be committed for construction in 2016, with another 3000 in 2017. While there are promising signs that investment is recommencing, we fell well short of our 2016 milestone and our ability to reach 33,000 GWh by 2020 is looking shaky. 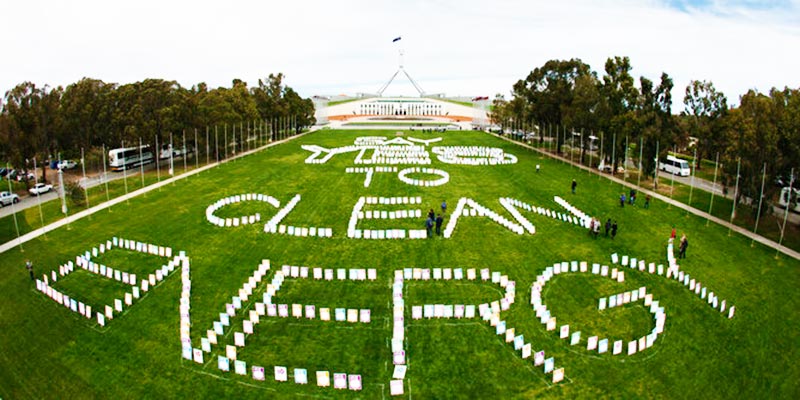 Missed by most in the media frenzy, Frydenberg appeared to lay the groundwork for not extending the Federal RET beyond 2020. “When you look at the effectiveness, both in terms of cost as well as reducing emissions, of the various mechanisms that we have, the RET is not at the top of the list,” Frydenberg said.

Extending support for renewables beyond 2020 has been one of the renewable energy sector’s most consistent requests, and one necessary to provide investment certainty to an industry that has faced intense political instability for many years now. Failure to secure bipartisanship support for extended support to at least 2030 risks the future of the industry.Climate Institute CEO, John Connor said that if a market mechanism was off the table, the Government could regulate to phase out ageing power plants, increase government spending to replenish the Emissions ­Reduction Fund, or leave the states to establish their own emissions intensity scheme. “Doing nothing is not a solution,” he said.

But with the government locked in policy paralysis, 'doing nothing' might be where they land.If the Government decides to descend back into the ‘climate wars’ of recent years, it will be regional communities, farmers, professionals and climate advocates who will join together to ensure Australia’s has a clean energy future. Every new wind farm that’s built and every new community that experiences the benefits of having wind turbines in their area creates new advocates who are increasingly prepared to talk about why wind power is a win-win scenario.