A RET at last 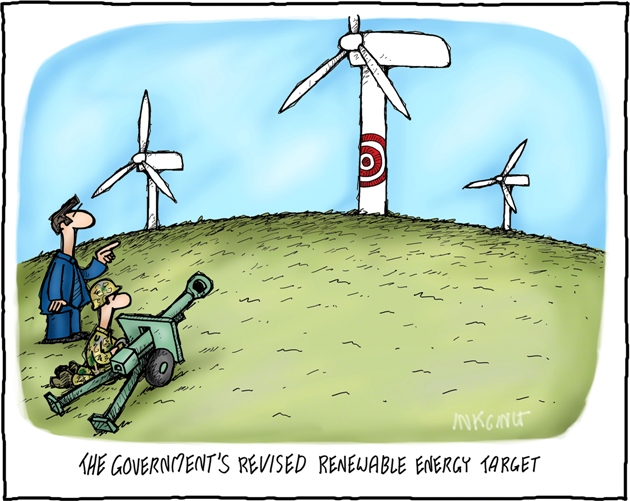 The nightmare that was the RET Review is over. As of the 18th May we have a bipartisan agreement of 33,000GW by 2020 with no biannual reviews and the inclusion of biomass still to be considered. The previous bipartisan RET has been reduced by 20% with trade exposed industries exempt. A Renewable Energy Target will now be put to the Senate.

But let’s not move on too quickly. Just pause to think about how costly this whole “Review” has been to Australia's emission reductions, to regional communities and to the renewable energy industry.

It is May 2015, 18 months after the Warburton Review was appointed to scuttle renewable energy in Australia. Despite the Review’s best efforts it was unable to kill off the RET due to annoying things like facts and electoral support for clean energy. But this didn’t matter. The delayed decision on the future of the target has been sufficient to see investment almost bleed to death.

The Federal Government came under sustained pressure from industry and the community to agree on a target that will provide investment certainty and a green light to stalled renewable energy projects across the nation. Even some of the Government’s own backbenchers finally broke ranks in support of a RET deal.

However with fingers crossed behind his back, Minister for Industry and Science, Ian Macfarlane went into every RET negotiation as the smiling assassin. Last week, at the last minute, even after the bipartisan media announcement that the deal was done, the Government added the sting in the tail that saw the deal collapse for a further week! The reduced renewable energy target of 33,000GW was to include the burning of native forest “waste” and wait...you guessed it! A RET Review every two years. Labor was flabbergasted and withdrew from negotiations. Industry was gutted. Some cross benchers were wooed by the promise of the timber industry getting a guernsey.

Then two weeks later, the Prime Minister reportedly intervened to overrule Macfarlane and remove the two year reviews. This allowed a final deal to be announced.

True to form and even after the deal was announced, Ian Macfarlane returned to the media to promote doubts that industry could deliver on the new projects in time.

Regional wind communities took another economic hit at a time when unemployment is rising.

Once the deal is legislated, coal and gas generators can revise their balance sheets upwards.

The obvious conclusion: The Abbott government has been prepared to put Australians and their future at risk for short term gains by the fossil fuel industry. While the rest of the world embraces renewable energy at a cracking pace the Australian Government’s message to renewable energy investors has been “Go away..far away..if you want to do business in Australia we will make it as difficult for you as possible.”

So don’t be fooled into thinking that this LNP will deliver a proactive clean energy pathway for Australia. They had to be dragged kicking and screaming to this resolution and will have to be pulled along for any further vision. So the fight for clean energy and emmisson reduction continues.

One upside is that some States and Territories are clearly at odds with the Federal Government on the RET and are establishing their own trajectories.