A job worth keeping 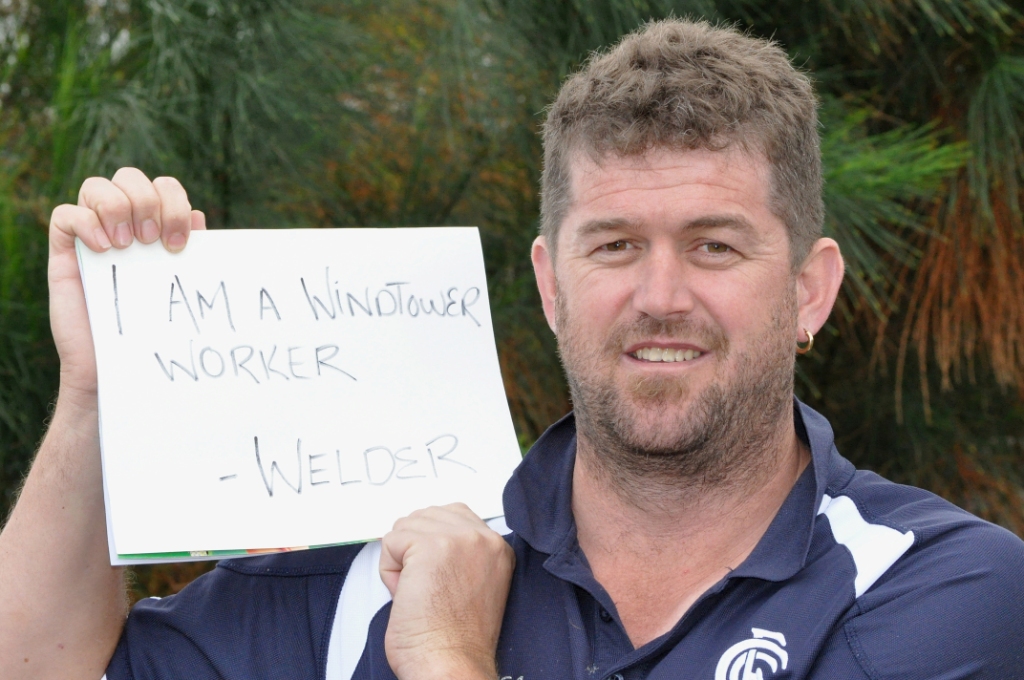 JASON “Grub” Bannam loves his job. Working as a welder on massive wind towers has taught the former postie many things, and he enjoys the camaraderie of his workplace, too.

But he worries that his job may go the way that others at his company have, with uncertainty in the wind energy market and cheaper imports stopping companies from buying the towers that his company, Keppel Prince Engineering, (KPE) produces.

KPE in Portland, far south-west Victoria, used to employ 120 people directly in its with tower division, but that workforce is now down to 65 because work has dried up.

The company is currently building the massive white towers for a wind farm in New South Wales, but production supervisor Stuart Batten says there is only three months’ worth of work left in that, and unless there are new contracts coming up the company will probably have to lay off more workers.

Grub says life has been hard for some of the workers that were made redundant.

“It’s hard to find a job in Portland, so a lot of fellas have had to move away or take on fly-in, fly-out work. It’s OK for some of the single guys, but for those with families who have never worked away from Portland and have been forced into the position, it’s been very hard. Some of them have given it a go but returned home,” he said.

“I’ve got a car that’s 10 years old and I’d like to replace it, and I know some of my workmates have other spending they would like to do like major renovations, but they are holding off because they don’t know that their jobs are going to last.”

“You can see how that impacts on the town, with people obviously not spending as much and lots of shops closing.”

If more jobs had to go Grub worries that entire families could be hit hard, because many couples, siblings and relatives worked for KPE.

“If you lose one income in a family you might be able to get by, but losing more than that could hit people really hard.”

Stuart says more than 65 jobs at KPE are currently on the line because the company also has administration support staff, a crane division and technical people helping the wind tower builders.

“That could see an extra 55 people lose their job, not to mention the impact that would have on other businesses in the region from lost business.”

“Once people lose their jobs here it’s hard to keep them in town because the skills they gain here are very specialised, so it can be tough getting them back,” Stuart added.

The wind tower division is being hit hard by multiple forces:

·         Uncertainty about the Renewable Energy Target at a Federal Government level.

·         The State Government’s 2011 laws that put a blanket ban on wind farms within 2km of a house unless there was written permission by the owner, created no-go zones and required Local Governments to do planning work that the State Government had previously taken on. These changes may jeopardise a number of projects with existing permits and have almost shut down the pipeline of new project applications.

These policies are also making it hard for wind energy companies to source financing for their projects.

·         KPE is also losing contracts to overseas wind tower builders that it believes are selling their products at below-cost price to undercut local builders. That case is currently being considered in an anti-dumping trial by Australian Customs.

The Victorian Wind Alliance brings together communities, businesses and individuals in Victoria who support more wind energy for our state. For more information go to www.vicwind.org.au.

What can you do to show support for workers like Grub?

* Become a member of VicWind for just $20 a year

* Sign the petition of our coalition partners at Yes2Renewables