Posted by Siobhan Isherwood on September 05, 2017

Some people, it seems, just can’t get over coal, no matter what the cost.

When the Chief Scientist, Dr Alan Finkel, recommended the government adopt a Clean Energy Target the cry went up from coal-lovers in their party - give us more coal!

That’s why the Australian Wind Alliance joined with 13 other environmental and social justice organisations to call on Minister Frydenberg to stand up to those dinosaurs and make sure there was no room for new coal in their Clean Energy Target.

Recent analysis by Reputex has shown that a CET that cut emissions by 28%, as recommended by Dr Finkel, wouldn’t be sufficient to bring Australia’s emissions trajectory in line with the Paris agreement. Instead, their modelling reckons cuts of at least 45% will be required to meet our baseline obligations. An even higher target would “assist in broader economic transformation” and help Australia reach its emissions target sooner.

Watering down Dr Finkel’s CET by including new coal would make the job impossible. Additional government spending on entrenching the role of coal in our energy sector will be disastrous for our economy, our environment and our health.

The open letter, sent to the Environment and Energy Minister last Friday, notes Minister Frydenberg’s efforts to get a bipartisan outcome and urges him to stand up to the coal-obsessed dinosaurs in his party.

Australia needs a strong, clear, bipartisan energy policy to drive the inevitable transition over the coming decades. Only a strong Clean Energy Target which rules out coal can do that.

This is the letter that was sent to Minister Frydenberg. We will continue to put pressure on the Federal government to listen to the majority of Australians and deliver rational, effective energy policy. Become an Australian Wind Alliance  member to add your voice to the call.

We are writing to express our deep concerns about reports that direct financing for a new coal-fired power station is being considered as part of a deal to get the Clean Energy Target approved by the Coalition party room.

While we welcome your efforts to convince your party room to adopt a Clean Energy Target, a compromise that pushes for the construction of a new coal power station is unacceptable. This can only  undermine Australia’s Paris commitment to limit global warming to well below 2°C and to pursue a 1.5°C limit. It is clear that a 28% CET will fail to deliver on these commitments.

At a time when we need to act urgently to mitigate dangerous climate change, investing in coal-fired power, the most emissions intensive of all power generation, would be a misuse of public funds. Analyses by The Climate Institute, Climate Change Authority and International Energy Agency clearly show the need to phase out all existing coal-fired power stations across the OECD by 2035 at the very latest, more likely by 2030 to have any chance of limiting global warming to 2°C.

Adding new coal generation simply makes this equation harder: either the investment will be wasted because the new power station would need to close well before its intended design life, or it would keep polluting well beyond what we can afford from a climate perspective. Even the most efficient new coal generators produce over 0.7 tonnes of CO2 per megawatt-hour – an unacceptable amount of pollution that is (1) already above the global average emissions intensity, and (2) only marginally better than the Australian average emissions intensity. As recently demonstrated in a report by Environmental Justice Australia, there is also a significant toxic air pollution and human health burden associated even with new coal power stations.

As a signatory to the Paris Agreement, the Australian government needs to take its responsibility seriously and reduce emissions drastically and urgently. Repowering Australia with energy from renewable energy sources is the cheaper, cleaner, fairer and smarter way to resolve the energy crisis.

Support for renewable energy among the Australian public is overwhelming. Wind power is already the cheapest source of new-build electricity. Solar plus storage is the cheapest form of flexible supply. The cost of solar is halving every five years. In South Australia, a solar thermal proposal has just won a competitive tender for dispatchable supply.

In future, our grid will need flexible supply that can ramp up and down quickly to complement variable wind and solar. Alternatives such as solar thermal and low-cost pumped hydro will be more effective at stabilising the grid to provide reliable 24 hour supply. Coal is poorly suited to this role and, as the Australian Industry Group has noted, will not be the cheapest way of delivering reliable supply.

If the Federal government is concerned about energy security and energy prices, the best way to tackle these is through driving investment in diverse renewable energy sources, as well as getting serious about energy efficiency and demand management. This will not only provide clean energy but also bring down power prices and improve the resilience of the National Electricity Market.

We urge you to stand up to those in your party who want coal at any cost. In the interests of Australia's economic security and future growth, and to support consumers who are seeking downward pressure on electricity prices, we urge you to rule out any financing, subsidising, building or approving of new coal-fired power stations. Instead, we call on the Turnbull government to adopt an energy policy that rapidly accelerates the roll-out of renewable energy, including a Clean Energy Target that has real prospects of addressing our obligations under the Paris Agreement.

We would be happy to discuss any of the points raised in person. 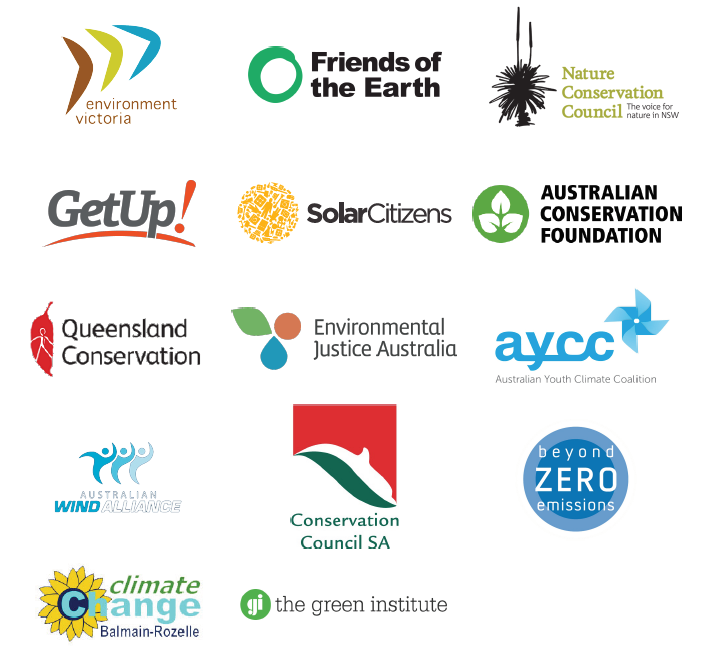